By default on every Linux distro after installing QEMU and libvirt two kinds of networking are available:

BRIDGED networking is also supported by libvirt but requires some manual work.
A possible networking schema could be the following: 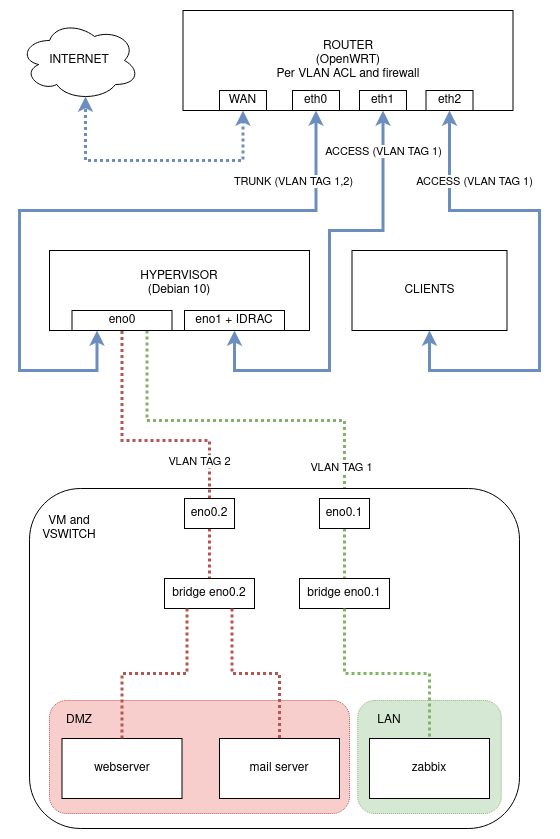 The goal, other than having proper networking for the VMs, is segregate the server management interface, IDRAC and internal VMs from the VMs that runs services exposed to internet.
Bonus point would be setup network bonding, but let’s leave it for the next episode.

Before we start let’s assume a few things have already been taken care of:

Most of the magic happens in /etc/network/interfaces:

This creates the following bridge interfaces that can then be used to connect virtual machines to the most appropriate network:

IP forwarding also has to be enabled:

This step can be done either by using virsh CLI utility or virt-manager, either of them can be used to bridge the VM virtual network adapter to one of the VLAN aware bridges that has been created on the hypervisor.
Supposing we have a virtual machine called mail that we want to put in DMZ, SSH into the hypervisor (IP 192.168.1.2 in this example) and edit the VM network configuration accordingly:

If the VM is goint to reside in the LAN network just replace source bridge with the appropriate bridge interface (in this example that would be eno0br0-2).

In this case I have used OpenWRT, but this can be accomplished with basically any decent router.
Navigate to Network -> Switch and configure it as follows:

Another important thing is configuring interfaces and firewall rules for the newly created VLANs in OpenWRT.
This is accomplished in Network -> Interfaces, from there add an interface called DMZ, in General Settings tab specify a static IP and a DNS; in the Firewall Settings tab create a new firewall zone and call it DMZ. Save and apply.
The last thing to do is setup firewall rules for inter VLAN communication; most likely one wants to be able to access everything from devices in VLAN 2 (clients and LAN VMs) but want to lock out every VM who is in VLAN 1 (DMZ).
Create a new rule to allow DMZ zoned devices to reach WAN, this is required for them to be able to reach internet.
At the same time add a firewall rule to allow LAN zoned devices to reach DMZ.
Firewall rules are:

This is it, a Debian box is now a proper hypervisor.